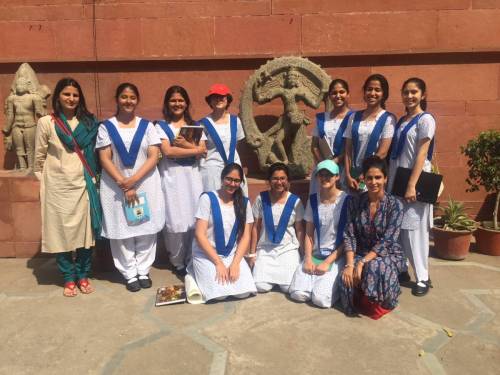 Some girls from the present SC Arts class visited the National Museum in Delhi, under the guidance of ex-welhamite Vasundhra Sangwan Berry.

In Vasundhara's words, " At the museum we first gave the girls a tour around the highlight objects and a basic understanding of museums, their purpose and collections. After the tour I divided them in two groups and gave them two objects each from our popular galleries and asked them to curate a one-object show on each after spending some time exploring the galleries on their own.The workshop was engaging and the girls did a great job on research and presentation of the given objects. The museum staff also appreciated the innovative ideas the girls presented in regard to the context of the object, their interpretation and display. Overall it was an enjoyable session at the museum and I hope the girls have learned something new and interesting to add to their skills. The National Museum also posted about the visit on their facebook page - https://www.facebook.com/Nationalmuseumnewdelhi/"

Vasundhra Sangwan is a professional in the arts and design field in Delhi and runs a consultancy called Synterior. From 2014 to 2017 she worked for the National Museum, Ministry of Culture, Govt. of India. She was a member of the outreach team and managed the upgradation of galleries, educational programmes, exhibitions, catalogues, website, social media, designed products and exhibits for Google Art Project and other forums the museum has been featured on recently.

After finishing her schooling from Welham Girls’ School, Dehradun she went to pursue a BSc. and MA in Human Resource Management from the Aston Business School, Birmingham and Westminster Business School, London respectively. A few years later, her great passion for design and aesthetics led her to change her career path from business to the art and design field. In 2012, she went to the Sotheby’s Institute of Art, London and pursued a degree in Contemporary Design. She was one of the two museum professionals selected from India for the International Training Programme at the British Museum, London in 2015.

Vasundhra has redesigned public zones of the museum and assisted in setting up of two permanent galleries, including the largest jewellery gallery in the country and India’s first gallery for the visually impaired in the public sector.

Currently she is working with private collections and artists and archiving collections, organising exhibitions and setting up a museum at a palace in Rajasthan. The most recent project was the curation, designing and setting up a permanent Gallery on Prime Minister Rajiv Gandhi to commentate his life on his 75th birthday this August.

Her passion for design also keeps her involved with interior projects for residential and commercial spaces.